Lily was born in China in the summer of 2008 with severe, bilateral club feet. The average family in China would not have the financial or medical resources to provide for a child with such a significant, physically disabling deformity. The scant records we have of her early days indicate that she was of normal birth weight. She spent her first three months in a state run orphanage during which time she failed to thrive and apparently suffered from frequent illness including ear infections.

Thankfully a private foster home intervened at this point in her life and she was taken in by this much smaller group home where she received one on one care, therapy, and treatment for her club feet. Most importantly she received love, adequate food, and daily prayer from her care givers.

This wonderful group home began a diary of her life with them. In the first months Lily was in their home she was reported to have frequent ear pain and infections. She also had difficulty eating. Along with taking her to an American missionary doctor for treatment of her club feet she was also taken to a doctor regarding her ears. This doctor determined (incorrectly) that she was 80% deaf in one ear and 20% deaf in the other.

When we decided to pursue the adoption of this sweet baby girl in July of 2009 the information that we had was that she had bilateral club feet, partial deafness, and possibly some unknown syndrome due to her lack of growth and development. She was severely underweight and height by American growth charts as well as having a very small head. We were advised by multiple doctors here in the states that we could be bringing home a child that would be little more than a vegetable.

Fortunately for her and for us we listened to the only voice that mattered and went forward with our adoption with numerous reassurances from the Great Physician that Lily was indeed our daughter. In the fall of 2009, in a government office on the other side of the world, we were handed the tiniest, frailest, and most sweet looking child I have ever laid eyes on.

At 16 months old Lily looked and acted like a 3 month old. She came to us just having endured chicken pox and having been hospitalized two weeks before our arrival. Whether it was due to her illness, the stress and chaos of traveling for the adoption, or her underlying 2q, we will never know, but she was absolutely skin and bones. She was unable to hold up her head or roll over on her own. She did, however, have a fearsome and robust set of lungs as well as an appetite and willingness and ability to eat. Due to her weakened condition she was limited to pureed consistency food and formula and she only had her four front teeth to work with.

With any internationally adopted child there are a flurry of medical checks and appointments when you come home. Unfortunately, as first time parents, we had no idea what to look for in a good pediatrician, let alone a pediatrician with knowledge of special needs children. We did manage to get the obvious issues addressed immediately. Her hearing test came back normal, praise God, but her tubes were completely blocked with fluid, thus the perceived deafness. She was also immediately set on a schedule for new serial casting to correct her feet which were reverting back to their old position. All of Lily’s basic blood tests came back normal. She had been vaccinated in China and her vaccinations were up to date and good.

At this point we simply set about trying to fatten our skinny child up. Because of her Chinese heritage the doctor was not overly concerned with her small size. She has an incredibly delicate bone structure, strong but delicate with long, slim legs, arms and fingers.

We started her in Birth to 3 as soon as we got referrals from the doctor. Lily was delayed in all areas but it was hard to discern if the cause was simply from the neglect and trauma of her rough beginnings or if there was something else going on. Due to her stunted hearing she very obviously had auditory processing issues on top of possible confusion with being surrounded by a new language. There was no measurable way to tell if Lily ever heard well enough to ever pick up her native Mandarin.

Somewhere around the 9 months home mark we started to get frustrated with our paediatrician’s lack of concern and/or interest in Lily. She was not gaining weight even though she was growing leaps and bounds in height. She was also not making as much progress as we had expected in her therapies. Her progress was a three steps forward two steps back type pattern. I was very concerned that she had some type of metabolic disorder. She ate massive portions of food but none of it stuck to her body.

We finally found a paediatrician who had a heart for special needs kids and that is when the wheels started moving. At our first appointment he diagnosed her PDD-NOS (pervasive developmental delays not otherwise specified, autism spectrum disorder) and Failure to Thrive with global developmental delays. We were immediately referred out for genetic testing and to the Waisman Center in Madison, WI for their neurodevelopmental clinic.

While we were waiting for our genetics consult Lily developed a new issue. Seizures. They first revealed themselves to us as febrile seizures. Not an uncommon thing is young children. My husband and I are EMT’s so while it was a disturbing development we were prepared to deal with it. After her second seizure in two weeks she was automatically scheduled for an EEG. This was where it was revealed that Lily actually had a very rare seizure disorder called ESES (electrical status epilepticus of sleep). Unbeknownst to us it was very likely that Lily had been having subclinical seizures (seizures you can’t see) while she was sleeping for months if not years. The results of untreated ESES are absolutely crippling. It looks like your child is sleeping normally but their brain is actually never shutting down and the brain’s electrical activity actually goes wild robbing these kids of any rest at all. It like severe sleep deprivation on a chronic level. Loss of coordination, muscle control, muscle tone, verbal ability, and cognitive ability are all part of this disorder.

Lily was immediately started on seizure control meds. We thought this diagnosis answered the majority of our questions and concerns. Even the lack of weight gain could be explained by the extra calories her body was consuming in her sleep. So we were very surprised when we got the report back from her genetics testing a few weeks later saying that she had a 2q23.1 microduplication. Unfortunately at this time there were no other known cases in the world of a 2q23.1 microdulpication. So all that they could tell us was that she had this but they had no idea what it meant, if it even meant anything because her duplication was incredibly small. So we just decided to go on with life and not worry about the genetic thing. We were already seeing Lily making improvements from being on the seizure medication.

Fast forward three years and we now know that all of Lily’s issues stem from her 2q23.1 microduplication. Global delays, hypotonia, autism spectrum, speech delays, foot abnormalities, seizure disorder, and acid reflux are all things commonly seen in other 2q children. She is still one of only a few dozen children worldwide who have this duplication diagnosis. But there are enough children with this diagnosis now to see that the results of a duplication at 2q23.1 have nearly the same results as a deletion at 2q23.1 and there are many more children with the deletion to gain information from.

At 5 ½ Lily is still completely non-verbal. She is making steady progress in all other areas of therapy. Due to her severe club feet she is in the process of corrective hip surgeries for hip dysplasia. She had one hip done last spring and the other hip will be done in a few weeks. She also needs additional tendon surgery on one foot for more aggressive correction; this will be done at the same time as her hip surgery. So while she is not walking yet, she is absolutely determined to walk on her own. Her ESES is under control with seizure medication. Lily still has very dramatic and dangerous febrile seizures any time she picks up a virus. We had her tonsils and adenoids out last summer as a preventative against strep and this helped but she just recently went through a nasty bout of influenza which brought out the febrile seizures again.

Even through all of the medical trials and madness Lily-an is one of the sweetest, most good natured, silliest, most delightful children I have ever known. Lily does not speak in the language of words. She speaks in the greater language of love, joy, and gladness that come from a pure heart. 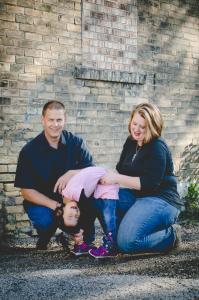 As we come around to another 2q awareness day we have a year of victories to rejoice in.

Survival was the only thing we clung to for those early years. First, searching and searching for answers with diagnosis on top of diagnosis rolling out for things that were only symptoms of something bigger. Finally getting an answer of 2q which was a bigger mystery than an answer.

Four years later we are learning how to breath again.

Successful hip surgeries have allowed Lily to start gaining her mobility and independence.

ABA (behavioral play therapy for autism) is helping her begin to participate in meaningful, relational communication. She is starting to use the iPad for basic communication skills.

She is LOVING first grade, her friends at school, and all her teachers. She hates to miss a day for any reason. Four years ago she couldn’t manage half an hour in a classroom let alone 5 hours, five days a week.

The biggest victory we are currently in the middle of is getting her seizure disorder under control. In October Lily started an experimental treatment for her type of seizure disorder. We have now completed 4 rounds of IVIG therapy with one more to go next month. Her first follow up EEG indicated that her seizures were gone. Judging from the changed girl we are seeing at home we are confident that her next EEG will confirm that the IVIG therapy is working.

Being diagnosed with 2q is not the end of the world. I won’t lie, it will turn your life upside down. But Lily proves to us every day that an upside down life is one worth living.