Isla was born after a normal pregnancy and is the 3rd child in our family.  She progressed normally reaching all her milestones normally.

We sought help early as she wasn’t babbling or talking.  Firstly she was referred to ENT and had a tongue tie release and adenoidectomy in October 2010 and grommets inserted. When the surgeon told me there was no fluid in her ears I pretty much knew we couldn’t blame glue ear for the lack of speech.  A hearing test further proved it wasn’t her hearing that was causing the speech delay.

We first saw a Pediatrician in January 2011 when Isla was 2 and her speech still hadn’t improved.  Her understanding was age appropriate but she had less than 5 words and didn’t babble or try to attempt words in picture books.  She was interactive, busy and we didn’t think there was anything else wrong.  No evidence of pervasive developmental disorder was found.  We were referred to Special Education and Isla started receiving speech therapy.

After a year of speech therapy we requested a review by the pediatrician.  She was referred for another hearing test and told to continue speech therapy.  We were told there was no evidence of autism and it was just an isolated expressive language delay.

On 16 July 2012 when Isla was 3 years and 6 months we went to see a private Pediatrician as we had concerns it was more than a speech delay.  My intuition told me that something wasn’t right.  We were right to seek further help as she was diagnosed with mild-moderate Autism Spectrum Disorder, hyperactive behavior and development delays especially expressive language.  The pediatrician requested molecular Karyotype and Fragile X testing.

The Fragile X test came back normal but I received a phone call from the Pediatrician on 6th September 2012 saying that Isla’s Molecular Karyotype Report had come back abnormal and we had been referred for Genetic Counseling  but there is a long waiting list.  We are still waiting to be seen…

Isla report says she has a chromosomal deletion involving the interstitial region or 2q23.1 .

Not knowing where else to turn I googled everything I could about this deletion and found the Facebook group that we all know and love.  I discovered that epilepsy is a major part of this syndrome so we went back to the pediatrician and requested an EEG, eye test, bloods, and help with her sleep.

Isla had an EEG on 12 October 2012 and sure enough it came back that Isla was having a small amount of generalised epileptiform activity (maximal anteriorly).  She had a few brief pale episodes with drooling and absences/staring when she was younger but we hadn’t thought much of them at the time. Isla since had a small seizure in December 2012. and is being monitored for further episodes.  Her eye test came back normal as did her bloods.  Melatonin was prescribed for Isla’s disrupted sleep and inability to settle.  This did help her settle but we found she was becoming clumsy and her speech regressed so she has stopped taking this.

This past few months has been a period of grief, denial, acceptance and finally getting a workable plan organised to get Isla all the help she needs to maximise her potential.

As Isla is becoming older the traits of this syndrome are becoming clearer.  Her speech is improving all the time but she is still not talking in full sentences, doesn’t have much expressive language and her speech isn’t clear.  She is receiving speech therapy.  We have an Occupational Therapist involved who has written a plan to help with her sensory motor skills and poor muscle tone which will hopefully help her clumsiness and self-control including her hyperactivity.   She attends preschool 5 mornings per week and although is social, she lacks forming attachments or making friendships.   She has a scattering of skills from age 2-3 but seems to be progressing with those skills although they are delayed.

We have a year before Isla starts school.  Getting Isla ready for school has always been our main goal and I feel confident with help Isla will be able to be integrated into a main stream school.

All of this aside Isla is a fun-loving, sweet-natured, affectionate easy-going little girl with a sense of humour who brings much joy to everyone.    Isla seems to have the neurological phenotypes of this syndrome but at this stage doesn’t look like she has the growth or skeletal abnormalities seen in other children.

Isla is now 7 years old.  She has come a long way.  Isla now attends a satellite class (of a special school) in a mainstream school as she needs extra help with her learning and behaviour management.  She now speaks very well but her writing and reading skills are taking some time although she is making small steps forward all the time.

She is now medicated for seizures and I am sure this has helped with development and sleep.  Although still an early riser she gets a lot more sleep than she used to.  The medication seems to keep seizures at bay although we still see the odd one break through when her medication is not right. 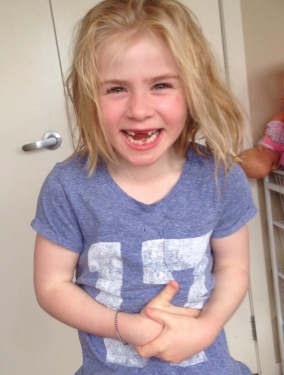 Isla attends art therapy, dance therapy, does equine therapy (horseriding), special needs football and loves swimming.  She has a lot of fun at these activities with the added benefit of helping her motor skills and social skills.

Isla’s autism makes her see the world a bit differently which has taught us so much.  She may act a bit differently, struggle with social skills and sensory issues but we have accepted Isla for who she is and our goal is to make her life as happy as possible.  She will travel a different path to what we thought but it doesn’t make her journey any less important.